Plastic Waste in the Oceans Could Treble Within the Next Decade… How are Brands Combating this Huge Consumer Issue?

We are all guilty of occasionally forgetting to recycle, or maybe accidentally chucking our plastic in the wrong bin when we are rushing out the door. But a study published by ‘Scientific Reports’  last week warned the vast dump of plastic waste swirling in the pacific ocean is now bigger than France, Germany and Spain combined-far larger than previously feared and growing rapidly. YIKES!

After 10.3 million people tuned into BBC documentary Blue Planet II it became clear that consumers are growing increasing worried about the effects plastic waste is having on the environment.

The popular chicken restaurant Nandos is just one of many companies adopting a new approach across its chain where customers have to request a straw. The company stated on Facebook – ‘Plastic straws are one of the top polluters on our beaches and can be harmful to wildlife’. This is yet another company adopting this approach and adding momentum to The Evening Standards ‘The Last Straw Campaign’ which began in January. 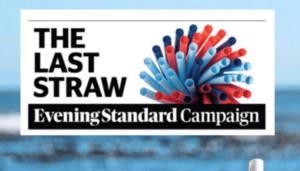 The consumer pr campaign recites shocking statics – ‘a massive TWO BILLION straws are thrown away in London each year alone. Overall the UK is the biggest user of plastic straws in Europe with an estimated 8.5 billion thrown away each year.  Straws are used for 20 minutes on average but take up to 500 years to break down’. The campaign coincides with the Government announcing plans to eliminate all plastic waste in Britain within 25 years. The campaign’s main message states ‘if you’re a business, stop handing them out, unless it’s absolutely necessary; and if you’re a consumer, just say no, because you don’t need it and you’ll be doing the oceans a massive favour’.

Coca-Cola and Iceland are yet more companies who are committed to reducing plastic waste, with Iceland understanding from a consumer perspective the need to go plastic free. In a statement released from the frozen food supermarket they found that in a survey of 5,000 UK consumers 80% would endorse a supermarkets move to go plastic free. And nearly 68% think that other supermarkets should follow this lead.

With consumers more engaged about plastic than ever before there is clearly a PR opportunity for brands, and while many brands will see trying to reduce plastic waste as the right thing to so, there is also evidence to suggest a financial benefit. Brands including Marks &Spencer and Waitrose have seen a reduction in costs by reducing how much plastic they use.

According to Marketing Week there is a need from brands to make the long term commitment. Despite all the positive reasons for focusing on sustainability, brands should be wary that mixing brand purpose with a sales message can backfire. Companies need to ensure that sustainability is not just a one-time PR opportunity but part of a longer term plan.

Scientific developments, ground breaking documentaries and consumer demands all mean that now is the time to tackle plastic. However, brands should be cautious that consumers won’t be fooled by one-time PR opportunities, and instead will reward brands who put environmental consciousness at their core.

Here’s a list of some of the brands committed to reducing waste: