With increasing numbers of workplaces introducing a dogs allowed policy many studies have now been done to explore the positive wellbeing effects that the presence of dogs in offices can have on the employees.

There are health benefits from the presence of dogs, for example according to the Blue Cross, stroking dogs reduces your blood pressure as well as reducing stress in general. The presence of dogs can reduce the levels of cortisol which is the hormone that makes you stressed and also cause you to produce more of the hormone oxytocin which makes you feel happier and more relaxed. According the Telegraph workplaces that allow dogs have fewer sick days.

It is common for people who work in offices to miss out on taking their lunch break. Having a canine work companion and their need to go outside to go to the toilet encourages employees to take their well needed break. Having had a break, people are likely to have an increased burst of productivity especially when concentration can dip in the afternoon!

The presence of dogs in an office space can also have social perks. For example, acting as icebreakers for clients and those working in different sectors of the company – encouraging individuals to chat to people that they wouldn’t normally.

If the idea of allowing dogs into the office is daunting to some, Bring Your Dog To Work Day (24th of June) is a perfect opportunity to trial the concept!

Some people might worry about dogs being allowed into office, in case of behavioural issues. There are ways in which companies can work around this, for example by having a pawthorisation process which determines whether a particular dog is suitable for the workplace.

At the Escapade office we have 3 office dogs, two Boxers called Joey and Lilly and a Border Terrier called Bella. Here’s what the Escapade team have to say about having dogs in the office:

“They’re just cute (…) I personally love dogs and I am obsessed, they make me smile. If you’re stressed they can destress you and it creates a nice atmosphere.”

“They are the perfect break during the day although I probably do take too many pictures of them.”

“I like that they get to be part of my working day when they’re here, and they’re happy because they get to socialise with all their human friends! Plus it’s nice to give them a little pat as a break every now and again!”

“It makes my heart feel warm, the sound of their snores is very relaxing!”

“Having dogs in the office makes it feel like home, it’s nice to go and sit with them when you just need a pause and a brain break!” 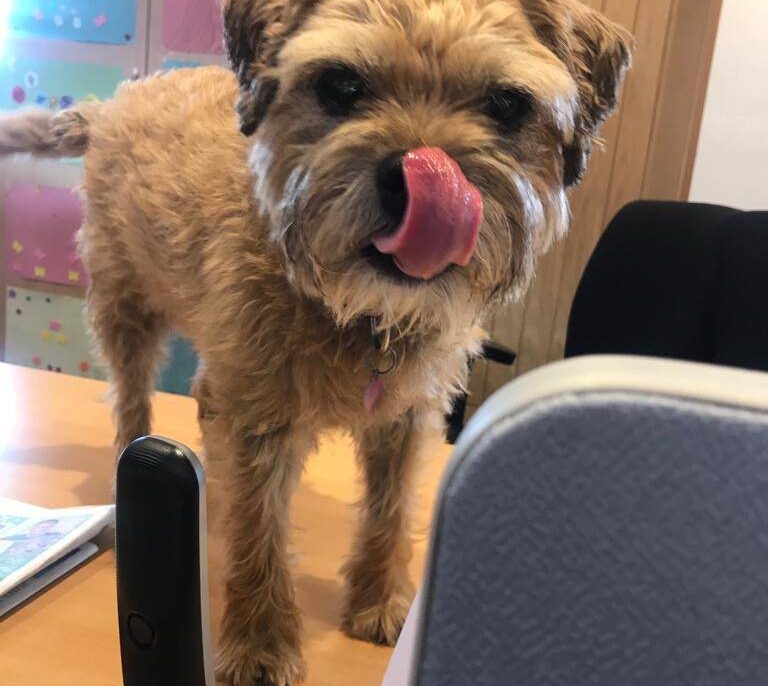