BAKE OFF IS BACK! 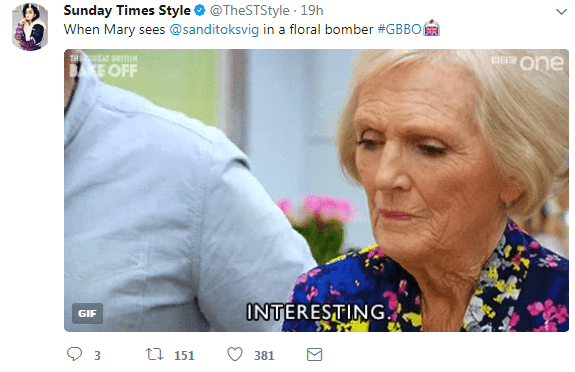 Tuesday night saw the return of The Great British Bake Off to our screens but now home to Channel 4, two new presenters, one new judge and 12 new contestants – how would it go down with the viewers? Like the highest scoring bake or as disastrous as Iain’s ‘Binned’ Alaska? Well, not far off being star baker it seems!  Despite the change, Bake Off still proved to be as popular as ever (or almost!) taking over the British TV viewing shares and social media alike.

Here are some of the star stats:

Given that Channel 4 is not available on all TV sets, it’s no surprise that the new home of Bake Off is very pleased with the response to the first episode.

What sparked most of the negative comments on social media was the adverts that now feature in the programme, as a result of the move from the BBC to Channel 4.  The premiere episode is said to have had almost 17 minutes worth of adverts in total over the course of the 75 minute programme.  Of course, the ad breaks were carefully timed so as to try not to disrupt the flow of bakes too much whilst still building suspense.  The adverts were generally foodie focussed as you might expect, with Stork, PG Tips, Aldi, Carte D’or and KFC among the brands filling the pricey ad slots – said to cost as much as £200,000 per 30 seconds.

As a result, some of these brands saw instant social media coverage results.  Dr. Oetker was the most talked about brand on Twitter in relation to GBBO with 751 tweets, Stork with 201 tweets and eBay with 189; according to Marketing Week and data from Kantar Media’s Social TV Ratings tool, Instar Social.

Take a look at some of our top #GBBO tweets including THE sandwich cake: 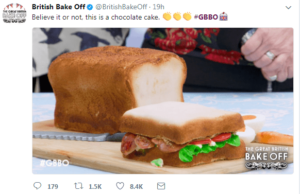 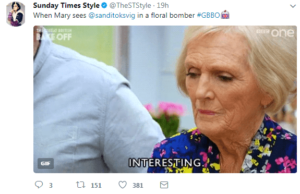 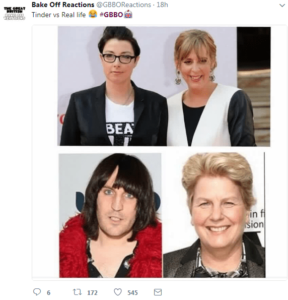 Welcome back Bake Off and farewell to our Tuesday night’s for the next nine weeks!