Is Love Island your type on paper? Many brands think so and are jumping on the bandwagon of the UK’s most popular summer show. 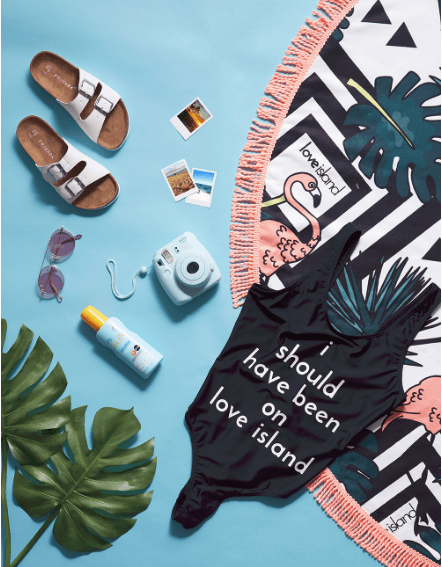 Unless you’ve been living under a rock for the past few years or you’re my mum, it’s hard to believe you have not heard of Love Island. The nations most talked and tweeted about show returned on Monday and with it summer officially and non officially started! The popular ITV2 show returned to our screens with a hot new cast including Danny Dyers daughter Dani Dyer (Yes, Danny dyers daughter is called Dani!)

It seems the hype around Love Island is showing no signs of slowing down. The Love Island launch show brought in an average of 2.95 million viewers in the biggest ever launch to date according to ITV News. The Love Island launch last night was the highest rating programme at 9pm across all channels, winning the slot with 2.9m viewers and 16.4% share, peaking with 3.4m viewers. More than doubling its audience since last year’s opening show and has broken the record of the most watched show on ITV2.

Putting all their eggs in one basket, brands across the country are jumping on the bandwagon to cash in on the nations most talked about show. Retailer PRIMARK has started selling official Love Island merchandise including T-Shirts, mugs, bum bags and swimwear, with the premise that what could be better than racing home every night to get in front of the telly to watch singles find love? Doing all that while kitted out in official love island PJs,  using the official love island mug of course. 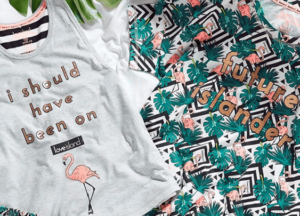 Primark isn’t the only retailer to partner with Love Island. Online retailer giant Missguided have partnered with Love Island to bring it’s shoppers all the latest looks from inside the villa direct to your wardrobe. On Monday launch night, Missguided hid 1000s of free items across their site in celebration of the hit show returning. This brilliant PR strategy gained excitement for the show, and bought thousands of wishful shoppers to the site. Yet again displaying how brands are making the most of the summer’s smash show. 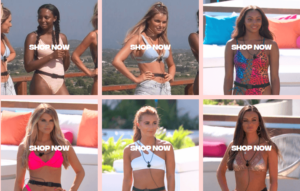 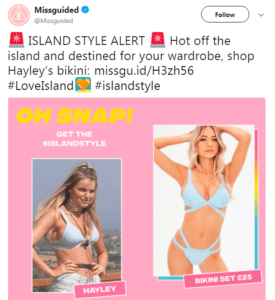 There has also been a huge opportunity for brands not officially involved in the show.  Social Media has been awash with posts about Love Island, and when the contestants are dumped from the show, brands are quick to monetize their following. For many small brands social media is a low cost and effective way of joining the conversation captivating the nation. From last year, the brands featured on the accounts of some of the former contestants include online fashion retailers Boohoo.com and Inthestyle.com.

It’s true Love Island has become much more than a TV show, with the promise of fame and fortune for the contestants, many go on to have successful careers as presenters, social media influencers, and just ya typical ‘Instagram-famous’ people. Last year’s winners Kem and Amber have made a staggering 2.2 million between them since leaving the villa, and their not even the top earners from Love Island 2017. Jonny Mitchell is the highest earner of last year’s show earning a whopping 1.3m since leaving, thanks to his stint on Celebrity Big Brother, and numerous advertising deals.

With all this money to be made, it’s no surprise brands jump at the chance to put the Love Island name, next to their brand. And it’s not just retail brands who have seen this is a winning strategy. Chessington World Of Adventures Resort, has joined forces with Danny Dyer who is set to narrate a Penguin Love Island Spoof.  The theme park and zoo debuted the first episode of Penguin Love Island, a four-part mini-series, on Tuesday. 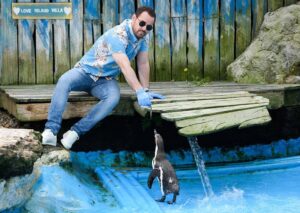 No were not mugging you off,  Dyer will document the relationships of Chessington’s resident Humboldt penguins, who have thrown caution to the wind and decided that mating for life is not for them. Penguin Love Island is available to watch on the Chessington World of Adventures social media accounts.

What do you think? Are these brands simply cashing in on great press, or are they going overboard?  BRB I’ve got a TEXT…..